Here is a quick look on how to use depth and space keys in order to make  keys, I will demonstrate them on VAG keys because they don’t have codes on them and usually they are not that difficult to decode.

VAG group locks has 8 wafers with 4 different heights that are 1 2 3 4 , those keys are used on VW Skoda Audi Seat & Porsche

The number 1 wafer  (first to the right) is from a newer lock that has traps inside,when using the VW decoder it will not reveal the true code of that wafer and a software is needed to find it out. Lishi  2 in 1 pick has  no problem with this lock.

First thing to know and remember is that there is never a jump from wafer 4 to wafer 1 so wafer 4 can only be followed by 2 or 3 and it’s the same for wafer number 1.  The lock will never work properly with this combination.

The D &S keys are 4 keys that are cut to each position and they are double-sided.

This is key No. 1 with four wafers on it ,only the first wafer is at the sheer line.

And this is key No.4

The VAG locks spacing is one up one down and usually found in cars from 1998 to 2002,the other models are two up two down

This is the old type lock

So for a locksmith that has a  cut to code machines,  making those keys shouldn’t be a problem and even if one or two of the codes are not certain ,you can always cut them deeper, but if you don’t have those machines you would have to use those S&D keys on a  dimple laser cutting machine.

So there are two main options ,one is dismantle the lock and the other is to decode it. (see my other sections on how they are decoded ).

If the lock is in your hand ,on the older types of locks you would get numbers on each wafer that will tell you what they are, if not you insert the S&D keys  to determine the code.

Here is key No.1 inside the locks and it reveals that wafer No.1 is not in the lock. If you look closely you can see how the tolerance is not so good with wafers No.1 &2 ,even though the wafer is not correct it is still in the sheer line.

Here is the third key

So basically now the fourth key is not needed as No.4 is all that left

So now that the code is known we can cut this key on the cutting machine ,another good use of the S&D keys is to copy keys to code.

This is a key that we need to know its code 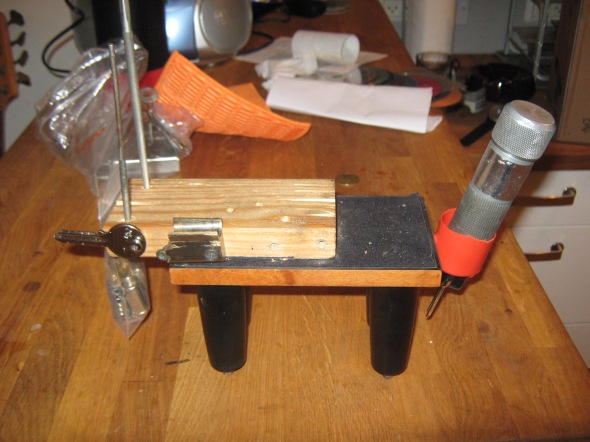 A few days ago I had to make keys to a very old Subaru vehicle (keys were lost).   Impressioning  is very easy with those locks so instead of stripping down the lock I made a key by file which took less than 10 minutes,then I had one of those “how come I never thought of this before”  moment as I realised that the job could have been much more comfortable with the proper tool .

Impressioning is a must have skill for any locksmith I belive, and I treat this  skill as a pure art.I still practice it but I usually gets to do at least 5 keys a week for different locks, however there is a big difference when working in the comfort of your shop or shad than on a real door.

In my new station “table”   I’ve made some adjustments:

I use a few different plugs to mark the spacing on the popular locks I’m more likely to come across with.Using this comb or a file I mark down the spacing of the pins.

In here I use this key for a” backwords” impressioning when I have the plug in hand and need to file down a key.

The wood has lanes for the key

Here is a picture on how it sits on my knee

All in all it didn’t take much time to bulid this and I must say I’m quite happy with this table.