Last week I got the new mul-t -lock XP cylinder from Fooddude of Island forum (thank you mate!) . There was a lot of buzz around this lock and since it had manged  to achieve the SS312 Diamond level of accreditation for a lock cylinders I was very curious to see the inside of this lock.

The XP lock is basically an improvement of the Garrison break secure lock that was also introduced by Mul-t-lock.

The lock has a broken secure cut but in a different position right before the 5th pin which is NOT available in the secure side.

It is also contains the “half-moon” anti drilling which I see for the first time in a lock outside of Israel.

The plug has only 6 pins (camber number 5 is blocked)

Since every Garrison must have a number 6 pin  because it’s the anti drilling pin this leaves us with only 5 power 6 which are 7,776 keys combinations that are not a very good ratio.

The bottom pins are all mushrooms and this lock is very hard to bump and impossible to use a foil picking method with.

Now all this is very nice but the major issue in the XP is the cam design. The plug doesn’t have C clips- it’s the cam that is actually holding them in place.

The cam designed as 2 pieces with a circle clip holding is together, which means that if the lock is attacked the cam can not break and I can imagine that  a lot of strength is needed to pull it out, in other word the other side of the plug must be snapped in order for the cam to release and even then it will cause a lot of mass inside the lock mechanism . 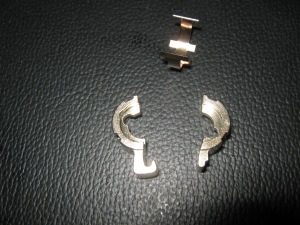 All in all I find this lock to have a very clever design and would definitely do the job, picking this lock however is very easy .

Here  is a quick look on my most favorite lock that I have in my locks collectors items – Mul-t-lock Gamma still in the box cylinder.

The date on the lock is  August 22nd 1979 and  it was the very first mul-t-lock cylinder and keys that were ever issued.

The very interesting story behind this lock was never really told outside of Israel but actually Mul-t-lock was a small department in Rav Bariach which are door manufactures in Israel who came up with a revolutionary idea of 4 ways lock.  Rav Bariach were a great success and completely changed the doors and locks market in Israel.

The first mul-t-lock was named Gamma and the key had no profile on it, Also the key was shorter and the telescopic pins were made of two parts and not one as we know it today.

The second version of the key was longer since a key protector was also installed in the door and Rav Barich had also came up with a steel door with the 4 ways lock already installed inside.

The first and second key

Since the lock was so succesful it became a target for an immediate attack which came very fast:  since the key had no profile or warding on it ,it was easy to insert a foil in the lock and get the code . This was revealed in a T.V show very similar to” Crime Watch” in the United Kingdom.  Rav Bariach  already had the new version of classic 06 key and did one of the most brilliant moves she could:  came live in the programme and admit that the lock had a fault and promised to replace the lock to the new version for a little extra cash. Thousands over thousands of locks were replaced and the Gamma version was droped . Getting the orignal lock still in the orignal box and in a new condition is impossible ,that’s what makes this lock a real collector’s item.

Assa Abloy finally bought  Mul-t-lock and decided not to buy Rav Bariach and made Mul-t-lock a very famous lock brand in the world.

Here are more pictures  of this very unique lock

The second version of the lock (still in the box!!!!)

All 3 generations of the key. 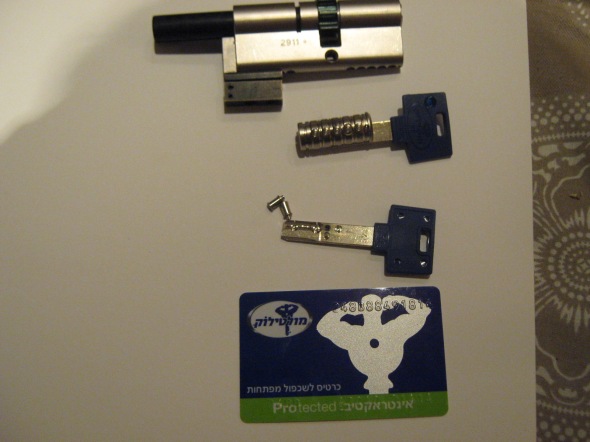 Mul-T-Lock Israel had changed the Interactive lock structure after some other company issued a similar key that could also be used to open their interactive locks.

The Interactive concept is based on a moving components in the key , this means that one pin is actually lower than the first position. In the old Mul-t-locks the part was inside the plug and used to lower the moving pin in the key. with the new design there is an upper pin and the key is different.

Here is the new key near the old key

The new pin and the back hole

Also the drivers (or body pin) were highly improved ,the edge of the inner pin was cut around in a way it would be caught in the plug pin. This deign plus the new interactive design makes this lock bump proof.

Here are the  B and C pins near the tab ones which are in black.

The wrong pins (not tabs)

The main reason for those pins I suspect is for copy control as it would be very hard to read the key without the card.

Just a quick look on how this neat system works. The purpose of this lock is to give a free change key without changing the lock itself . I haven’t looked into other systems yet, but I reckon they all have the same principle more or less.

The lock comes with 3 keys (usually green, yellow and red). The outer pins are all the same but the inner pins have a different end to them.

The inner pins come with an extra ball that will break into the plug which has special holes for that.

Here you can see the first key shear line. This key will work as long as you will put the next key in.

The next key is inserted, but the key combination is different. The inner pin is lower in one step, and the little ball will now arise and break when the plug is turned, leaving the first key useless.

And again now on pin number 5 . Lower combination key is inserted into the lock, leaving the second key useless.

So this is the basic change key system. It can also be 5 in 1 system and as you can see, bumping this lock with the old key is very very easy.