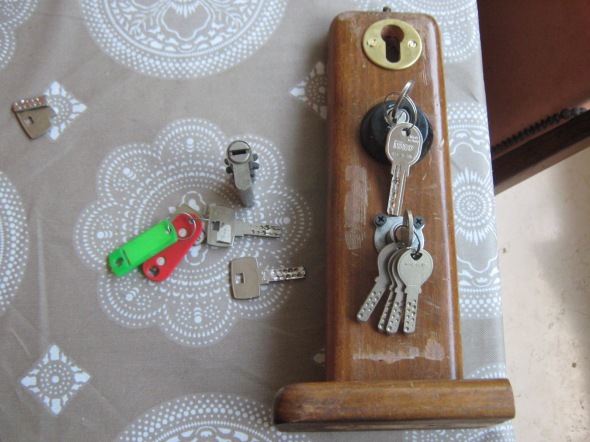 Last week I was forced to drill a Dom lock on a real lockout. I always feel bad when doing so ,even when sometimes it’s the only option (like glued locks etc.)

I’ve already covered the Dom locks in my blog and they are very hard to pick but possible. The trouble is on a real door when you lose the comfort of your vice and most of the time there’s a lock protector which makes it harder to tension.

I spent a few good hours on finding a better solution to this lock and found out that the  foil is the best way.  However there might be some problems when using this method.

I have five different  locks and three of them pick very easy,  one lock will pick but it will be impossible to remove the key after, I suspect the higher cuts( pin number 5) is going far too deep in the foil key , and the last lock will not pick and when I’ve looked more into the lock I’ve discovered that where it should have been pin number one it went all the way to the last pin for some reason. Also with this lock it is better to use pliers as bigger forced is needed.

To overcome those problems I’ve cut a substantial amount of the key  and since there isn’t a complex warding the key is working much better now  and will go on very smoothly.

Also  here’s a quick look on my new lock  training borad I’ve made this week. 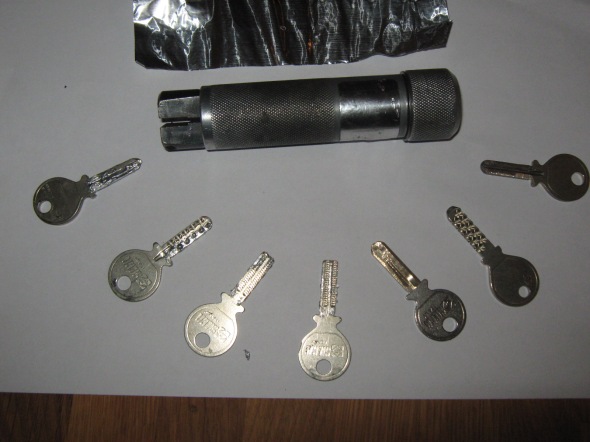 About a year ago I had a great meeting with Toools members from Holland and we even made a video together .

In the video I demonstrate a very cool dimple foil pick :

Lately I’ve decided to try more dimple locks with the foil method and I’ve had some good results(and some bad..)

The big  problem with dimple foil is that  in some key ways  it will tear the foil and it will be very hard to introduce a key that the foil won’t bend at some positions,also a deep cut near a low-cut can cause a problem.

The first lock I tested was a Keso 2000 ,this lock can be impressioned and picked but it would be very hard on a real door ,a simple solution is needed in here.

I  first tried to use a Keso blank to try foil but that didn’t work as the foil failed to enter the key way.I then tried some different blanks and different cutting of the key and found out that I can use a smaller shape blank and use a few layers of foils on a key meaning that if the first foil layer isn’t working after a few seconds then a second or even a third layer will open the lock.

Here is a video of the Keso foil picking

I have 6 other Keso locks which ALL of them were opened in a very short time ,this tells me that this method of using a smaller key is working .

Also I stand correct Keso are made in Switzerland and not in Italy.

This is  the key after the picking

I’m currently working on some other locks like Kaba etc. I will keep you posted.

Here is a quick view on 2 Dom locks I got

The lower one is Dom ix 10 ,those are very good locks made in Germany

Also it has one of the most nastiest  bottom pins I’ve ever seen!

The ix 5 lock contains 5 pins and 5 side pins

Here is the back of the plug with the other side pins,those pins will not effect picking but  they are great for master keying .

I did managed to bump this lock a while back though

The other Dom lock is the ix 10 which looks very hard to pick.

The pins are rounded to the shape of the plug

Here are 2 of the bottom pins

I can safely say that the best way to pick this lock is via foil picking ,only trouble I see is the extracting of the key after,also the low pins might get overset (they would look like pin number 5)

I will try to test a few different methods with those fantastic locks ,will  keep you posted