A relatively new lock is out in the UK ,the Millenco Magnum which is made in Chine.

This lock however is known in Israel for at least a couple of years (it’s named Superior in here).

There are only 3 heights to each pins.

I’ve sent a few of those locks to friends in England and the lock was picked but it’s not an easy one,it requires lots of patience and it’s quite tricky to pick. 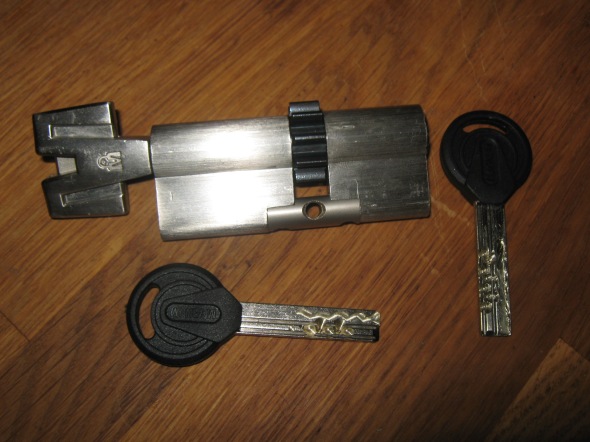 I tried to foil the lock at first but this method will not work in here, and then I first started thinking of making a bump key to this lock.

My first instinct was of course that it can’t work because of the side bar and the pins shape in the plug but I’m a great  believer in trying things . Making the groves for the side pins bump key wasn’t so easy at all but I did take some notice to the  VW keys patterns  I have and decided to try a few and after 5 blanks (the key material is very strong and will ruin cutters on the dimple cutting machine) I manged to bump  this lock!

Here are 2 videos of picking the lock by Mikey and Dark horse.

And Orc and Bill

Also a there is a very good video made by an English locksmith named Jay  from Island locksmith LTD.

I don’t know jay personally but I’ve heard many good things about him and judging from his videos he know his work very well (I can’t put his video  in here without a permission so you might want look for Millenco Magnum in YouTube.)

Here is a quick view on 2 Dom locks I got

The lower one is Dom ix 10 ,those are very good locks made in Germany

Also it has one of the most nastiest  bottom pins I’ve ever seen!

The ix 5 lock contains 5 pins and 5 side pins

Here is the back of the plug with the other side pins,those pins will not effect picking but  they are great for master keying .

I did managed to bump this lock a while back though

The other Dom lock is the ix 10 which looks very hard to pick.

The pins are rounded to the shape of the plug

Here are 2 of the bottom pins

I can safely say that the best way to pick this lock is via foil picking ,only trouble I see is the extracting of the key after,also the low pins might get overset (they would look like pin number 5)

I will try to test a few different methods with those fantastic locks ,will  keep you posted 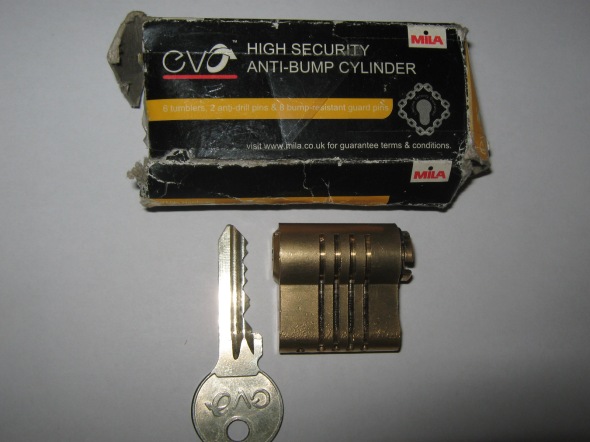 This is a Mila Evolution lock I got from Mikey from England. It’s a pretty good design I think and very interesting  as it is possible to pick or bump this lock but a nasty surprise then waits as the plug  starts to turn -the trap pins.

I’ve already seen trap pins on a Kale lock before and thought it was very clever as it will eliminate most picking possibilities except imprisoning.

This Mila Evo lock contains 6 pins but the trap pins will only effects  pins 2-4.

However it is possible at least with the lock I have to SPP the pins again so the  trap pins will be pushed down again.I also managed to find another way of using 5 different blanks that are cut into different heights while using a very thin wire to push the high pins you can turn the plug.

I will need to test a plug spinner on this lock as I think it might be able to turn it very fast .

BTW re pinning this lock was a complete nightmare as I had to build (or cut) a plug for those trap pins,also it took me 2 hours to find one trap pin that jumped out of the plug -so beware 😀

Medeco is one of the best locks in the world for its price and let me tell you, that picking this lock is a great challenge and a very rewarding one.

I’m not a world leading expert with Medeco’s locks but I do have re pinning kits and a cutting machine.

Medeco locks usually come with 5 or 6 pins. The lock has a side bar that is operated with the end of the pins.

On the key itself you would find 3 different angles Right, Centre and Left

When cutting a key or picking the lock you must find what angle the pin is.
Here are few photos of the side bar and how the pins are set in:

Jon King (http://theamazingking.com/)  made a tool that can measure the angles and set them in place and after you set the side bar you can pick Medeco like any other pin tumblers lock.

However, you can build you own tool to do that and if you are patient enough you can pick the lock.

The side bar has a lane in the lock’s body:

Marc Tobias is one of Medeco’s worst nightmares…. When bumping hit the news in America, Medeco quickly jumped on the train and showed how to bump locks just to sell more of their locks. Tobias made videos of him and his partner bumping and picking locks and even wrote a book about it http://www.amazon.com/OPEN-THIRTY-SECONDS-Cracking-America/dp/0975947923

Just a quick look on how this neat system works. The purpose of this lock is to give a free change key without changing the lock itself . I haven’t looked into other systems yet, but I reckon they all have the same principle more or less.

The lock comes with 3 keys (usually green, yellow and red). The outer pins are all the same but the inner pins have a different end to them.

The inner pins come with an extra ball that will break into the plug which has special holes for that.

Here you can see the first key shear line. This key will work as long as you will put the next key in.

The next key is inserted, but the key combination is different. The inner pin is lower in one step, and the little ball will now arise and break when the plug is turned, leaving the first key useless.

And again now on pin number 5 . Lower combination key is inserted into the lock, leaving the second key useless.

So this is the basic change key system. It can also be 5 in 1 system and as you can see, bumping this lock with the old key is very very easy.

Bumping is a method that existed for years, but only in the last few years it was been exposed to the public’s eye, mainly through the internet.

A bump key is actually a key that is cut to the highest position, when you hit that key some pins will jump and with the perfect timing it would be possible to turn the plug. Some very high security locks surrender to this method.

Here is how it works..

This is a Linca lock from Spain, this lock has 5 pins and a side bar

A Fab lock that is almost impossible to pick

A Yardeny lock from Israel with 10 pins

So, what do you say?

This will be my site, writing about something I am passionate about.. lock picking!